COVID-19 (Coronavirus) update: Whilst we are continuing to ship customer orders, same day dispatch is not guaranteed. Lead times for out of stock / back order and non-stocked items are increasing due to our suppliers operating with reduced staffing levels. International deliveries - please allow extra time for your order to arrive with delays in the transport network worldwide. Some countries have suspended their internal postal system so please check with your local postal service before ordering.  Royal Mail is unable to guarantee its UK Next Day Special Delivery service.

Ordered late Sunday and delivered by standard mail Tuesday morning, exactly what I wanted and...
Idris Lewis 09/06/2020
Ordered parts in the morning and despite the Corona crisis and standard delivery specified, they...
Ian Mitchell 07/06/2020
Excellent! First purchase VERY fast service highly recommended ????
Denis Speirs 02/06/2020
Great products and service. Couldn't be happier. In my hands within 23hrs of ordering. Ideal...
Stuart Webb-Davies 19/05/2020
Good product and an excellent service. Extremely good price for a high quality product
Mel Plant 05/05/2020
I have used Technobots for a few years, I am principally using components for radio-controlled...
Tony Simons 27/04/2020
Found this site on Google, was really impressed by the price but still a little sceptical....
Kristian 25/04/2020
I work on interractive models for a National Trust property, several get broken every year...
John Shrewsbury 20/04/2020
Quickest delivery I have had, great selection of components and materials.
Ian 31/03/2020
Always first class products and prompt service, a target for other companies
Brian Knight 23/03/2020
First time order, found this company through an internet search for a less common component. I...
NL 18/03/2020
Fantastic quick service . will recommend...and use again
Will Turner 17/03/2020
First rate products, prices, service and packaging. I have placed three orders now and they have...
David Smith 11/03/2020
Great service I know where to come in future
Lesh 02/03/2020
Excellent to deal with well layed out and excellent information available with products. Order...
John Barkess 01/03/2020
Excellent service. Ordered on Sunday night and delivered Tuesday.
Terry Gough 26/02/2020
I placed my order on the Friday and I received my items the next day excellent service would...
L 25/01/2020
Excellent.
CDH 22/01/2020
Prompt delivery of good quality item in new condition. Excellent seller.
Hugh 26/11/2019
Found company by online search excellent service competitive prices with fast delivery will use...
Alan G 12/11/2019
Just found this company and I'm very happy with the service they provide. Good prices and quick...
CDH 30/10/2019
Excellent service. Not only do have the range, but you also (crucially) maintain it in stock in...
Paul 01/10/2019
First time I have used the company. order process was good, good communications about order and...
Phillip 06/09/2019
Really good and reliable service, can't fault them at all. Also have a range of products that's...
Graham McPhee 16/08/2019
Excellent, fast service. Great quality gears. Will be ordering again, many thanks.
Kevin Allcock 13/07/2019
Have been using Technobots for several years for both mechanical and electronic parts - excellent...
GB 20/06/2019
Just received my 40th order from Technobots which like its predecessors was processed promptly...
Roger Labbett 19/06/2019
I bought some miniature steel angle brackets (part no 4607-036) to make a bespoke perspex cover...
Brian George 11/06/2019
Excellent service to a infrequent customer & small order. My main interest is model railways but...
Allen Morgan 24/05/2019
Excellent. 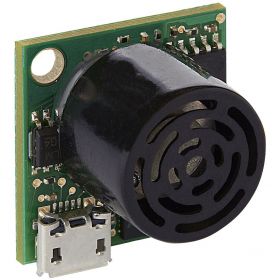 The USB‑ProxSonar‑EZ3 has a detection zone of ~2 feet and will allow for 13+ simultaneous sensors.

Easy to Use Ultrasonic Sensors

The USB‑ProxSonar‑EZ products are low cost ultrasonic proximity sensors that provide a component module solution that offers easy to use outputs, no sensor dead zone, calibrated beam patterns, stable range readings, low power demands, and a host of other features detailed in the product datasheets.

The USB‑ProxSonar‑EZ interface was designed to be very easy and intuitive to use. The interface is an easy to use USB connection.

The USB‑ProxSonar‑EZ offers a controlled beam that is designed to reject small objects (clutter) outside of the central beam area without detecting frivolous or unwanted targets.

Each USB‑ProxSonar‑EZ is tested for proper operation at our facility and comes with a factory calibrated beam pattern to help ensure consistent operation of the sensor even from part to part.

In addition to this, the USB‑ProxSonar‑EZ automatically calibrates to its environment after power up, before taking the first reading. Because this power up calibration only occurs on power up, it is recommended that users power off and then on the sensor whenever the voltage, temperature, or humidity conditions change.