COVID-19 (Coronavirus) update: Whilst we continue to ship customer orders, same day dispatch is not guaranteed. Domestic & International deliveries may be subject to transport network delays- please allow extra time for your order to arrive.

Excellent, quick and reliable service. All the items I ordered got to me, even though some had to...
Richard Whitehurst 29/07/2020
Super speedy delivery on the normal postage charge, items came next day. Really impressed.
Glenn Martin 07/07/2020
Ordered late Sunday and delivered by standard mail Tuesday morning, exactly what I wanted and...
Idris Lewis 09/06/2020
Ordered parts in the morning and despite the Corona crisis and standard delivery specified, they...
Ian Mitchell 07/06/2020
Excellent! First purchase VERY fast service highly recommended ????
Denis Speirs 02/06/2020
Great products and service. Couldn't be happier. In my hands within 23hrs of ordering. Ideal...
Stuart Webb-Davies 19/05/2020
Good product and an excellent service. Extremely good price for a high quality product
Mel Plant 05/05/2020
I have used Technobots for a few years, I am principally using components for radio-controlled...
Tony Simons 27/04/2020
Found this site on Google, was really impressed by the price but still a little sceptical....
Kristian 25/04/2020
I work on interractive models for a National Trust property, several get broken every year...
John Shrewsbury 20/04/2020
Quickest delivery I have had, great selection of components and materials.
Ian 31/03/2020
Always first class products and prompt service, a target for other companies
Brian Knight 23/03/2020
First time order, found this company through an internet search for a less common component. I...
NL 18/03/2020
Fantastic quick service . will recommend...and use again
Will Turner 17/03/2020
First rate products, prices, service and packaging. I have placed three orders now and they have...
David Smith 11/03/2020
Great service I know where to come in future
Lesh 02/03/2020
Excellent to deal with well layed out and excellent information available with products. Order...
John Barkess 01/03/2020
Excellent service. Ordered on Sunday night and delivered Tuesday.
Terry Gough 26/02/2020
I placed my order on the Friday and I received my items the next day excellent service would...
L 25/01/2020
Excellent.
CDH 22/01/2020
Prompt delivery of good quality item in new condition. Excellent seller.
Hugh 26/11/2019
Found company by online search excellent service competitive prices with fast delivery will use...
Alan G 12/11/2019
Just found this company and I'm very happy with the service they provide. Good prices and quick...
CDH 30/10/2019
Excellent service. Not only do have the range, but you also (crucially) maintain it in stock in...
Paul 01/10/2019
First time I have used the company. order process was good, good communications about order and...
Phillip 06/09/2019
Really good and reliable service, can't fault them at all. Also have a range of products that's...
Graham McPhee 16/08/2019
Excellent, fast service. Great quality gears. Will be ordering again, many thanks.
Kevin Allcock 13/07/2019
Have been using Technobots for several years for both mechanical and electronic parts - excellent...
GB 20/06/2019
Just received my 40th order from Technobots which like its predecessors was processed promptly...
Roger Labbett 19/06/2019
I bought some miniature steel angle brackets (part no 4607-036) to make a bespoke perspex cover...
Brian George 11/06/2019

The Pololu Pushbutton Power Switches are sophisticated power control alternatives to bulky mechanical switches. The main function is pushbutton-based latching power control, where one push turns on power and another push turns it off. Additional control inputs allow advanced applications such as automatic shutdown by the device being powered. This low-voltage (LV) version operates from 2.2 V to 20 V and can deliver continuous currents up to around 6 A.

The Pololu Pushbutton Power Switch is a compact, solid-state power switch that features built-in reverse-voltage protection and is controlled by a momentary pushbutton: one push turns on power and another push turns it off. This is a patented design initially created for use in our own products as an alternative to bulky mechanical switches. Because the switched current does not flow through the mechanical switch, a large variety of small, low-power switches can be used to control a substantial amount of power. The use of momentary switches also allows multiple switches to be used in parallel to control the power to one load.

The switch and control inputs control the state of a latching circuit that in turn controls a pair of power MOSFETs through which the main current flows. Four versions of the Pololu Pushbutton Power Switches are available: 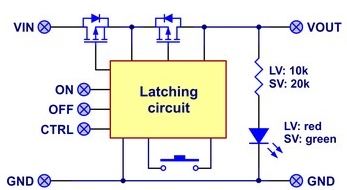 The two Mini Pushbutton Power Switches are smaller, lower-current versions that are useful for applications with tight size constraints or lower power requirements. Also, the the Mini LV is the only one of the four that works below 4.5 V; since it can operate down to 2.2 V, this version can be used with a single lithium cell battery. 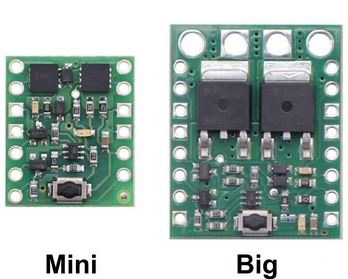 The pinout of the Big version is the same as the pinout of the Mini version with several additional redundant connection points for convenience, including main power connections that are compatible with 5 mm terminal blocks.

The primary functional difference between the each of the units arises from the MOSFET used, which sets the operating range and performance of the units:

2 On state current is dominated by indicator LED; current is approximately proportional to input voltage.

Please note that this switch has several drawbacks when compared to mechanical switches, so please be sure you fully understand this product before using it in your system.

Compared to the previous versions of the Pololu pushbutton power switches, the new versions deliver less current but have substantially expanded operating voltage ranges along with reverse-voltage protection and more control options. The size and pinout has changed, so the new versions cannot be used as direct drop-in replacements for the old ones. 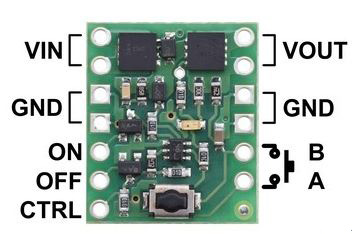 The ON, OFF, and CTRL pins on the pushbutton power switch do not require a pulse to operate, but leaving any of them in a high state could interfere with the switch’s other control methods, so we generally recommend using pulsed signals with them. The input structures for the three control inputs are shown below:

The Pushbutton Power Switch is compatible with solderless breadboards and perforated circuit boards with standard 0.1″ spacing. For such applications, the included male header pins can be soldered to the switch PCB. Alternatively, wires can be soldered directly to the switch PCB for non-breadboard applications. For high-current applications, make sure that the wires can safely carry the current. Two pads/pins are provided for each of the power nodes, and multiple pads should be used for applications drawing over 5 A.

The switch operating range is limited by the ability to change state reliably. At low voltages, the switch is difficult to turn on, and the switch will turn itself off once the voltage falls far enough (this shutoff point can be as high as 4.5 V and 2 V for the SV and LV versions, respectively). At high voltages, the switches are more likely to turn on when power is initially applied. The reliability of turning off is affected by a combination of the supply voltage, the amount of bouncing on the pushbutton switch, and the amount of noise on the supply line. For applications at the high end of the operating range, tests should be performed to ensure that the device can properly turn off.