EU Orders under £125 (€150) - As a registered IOSS company, EU orders include VAT avoiding additional charges and delays for the customer at Customs entry.

EU Orders over £125 (€150) or for EU business customers - the VAT will be refunded before goods are dispatched. Please note, VAT and duty may be charged direct to the customer at customs entry by the shipping company.  EU business user accounts can be upgraded to be automatically VAT exempt on request.

I HAVE ALWAYS RECEIVED A VERY GOOD SERVICE
FROM TECHNOBOTS. A QUICK DISPATCH TIME AND
EMAIL...
RICHARD OUARET 09/08/2021
As usual all products turned up next day in perfect condition.
Ian B 06/07/2021
All products turned up the next day in perfect condition, excellent service.
Ian B 25/05/2021
As always my order was dispatched before orders from other companies at a lower postage cost. I...
Paul Freeman 05/05/2021
Ordered a chain and sprockets plus other bits. Couldn't believe everything except two sprockets...
Allen 22/04/2021
Cracking motors, so scrumptious!

Cheers Geoff!
Martin Tyler and Alan Smith 21/04/2021
So far I've bought several sizes of drive belt from Technobots - every time they were excellent...
Grahame M 21/04/2021
Excellent Service, prompt delivery, thank you!
Brian Wise 27/03/2021
Ordered some makerbeam products. Arrived quickly, perfect condition, well worth money. Thanks for...
Parts for small computer build 02/02/2021
Excellent company to deal with Prompt and Efficient, also when I rethought a problem they...
John Shrewsbury 08/01/2021
Super fast shipping top quality items and service will purchase again.
JOHN Berrington 18/12/2020
Excellent. Looked all over locally and on the internet and then found TECHNOBOTS. Everything I...
Rick Oades 06/11/2020
Very good service and quick delivery. Reccommended.
Alan 28/10/2020
This is my first order with Technobots. I ordered on Wednesday and the package arrived on...
J 24/10/2020
Brilliant service, drive belt arrived after 1 day
Thankyou
John tansey 14/10/2020
Great service from you in the past and hopefully in the future. Last order arrived next day magic!
Ron Hazeldine 14/10/2020
Excellent A1 service, thankyou.
Peter 14/10/2020
Technobots have a good range of stock, in usefull pack sizes and good prices. The website is easy...
Adrian 26/08/2020
Excellent, quick and reliable service. All the items I ordered got to me, even though some had to...
Richard Whitehurst 29/07/2020
Super speedy delivery on the normal postage charge, items came next day. Really impressed.
Glenn Martin 07/07/2020
Ordered late Sunday and delivered by standard mail Tuesday morning, exactly what I wanted and...
Idris Lewis 09/06/2020
Ordered parts in the morning and despite the Corona crisis and standard delivery specified, they...
Ian Mitchell 07/06/2020
Excellent! First purchase VERY fast service highly recommended ????
Denis Speirs 02/06/2020
Great products and service. Couldn't be happier. In my hands within 23hrs of ordering. Ideal...
Stuart Webb-Davies 19/05/2020
Good product and an excellent service. Extremely good price for a high quality product
Mel Plant 05/05/2020
I have used Technobots for a few years, I am principally using components for radio-controlled...
Tony Simons 27/04/2020
Found this site on Google, was really impressed by the price but still a little sceptical....
Kristian 25/04/2020
I work on interractive models for a National Trust property, several get broken every year...
John Shrewsbury 20/04/2020
Quickest delivery I have had, great selection of components and materials.
Ian 31/03/2020
Always first class products and prompt service, a target for other companies
Brian Knight 23/03/2020

The A-Star 328PB Micro is a tiny programmable module featuring the ATmega328PB AVR microcontroller, a backward-compatible replacement for the popular ATmega328P that features more general-purpose I/O and many additional peripherals. This module provides access to all 24 digital input/output pins (of which 9 can be used as PWM outputs and 8 as analog inputs), all on a board measuring only 1.3″ × 0.7″. It ships preloaded with an Arduino-compatible serial bootloader that enables programming through the Arduino IDE via a USB-to-serial adapter, and the ISP pins are accessible for programming with an AVR programmer. This version features a 20 MHz resonator and a 5 V regulator that can be powered from 5.5 V to 15 V supplies.

The Pololu A-Star 328PB Micro is a general-purpose programmable module based on the ATmega328PB AVR microcontroller, which has 32 KB of flash program memory and 2 KB of RAM. The ATmega328PB is a backward-compatible, improved replacement for the popular ATmega328P found on other programmable modules like the Arduino Uno and Pro Mini, so programs written for those other boards will generally work on the A-Star 328PB Micro with appropriate adjustments for any differences in clock speed. On-board features of the A-Star (abbreviated A*) include a resonator, user and power LEDs, and a reset button. The board includes a low-dropout linear voltage regulator that allows it to be powered from external supplies up to 15 V, and reverse voltage protection on this main power input helps safeguard against accidental damage. The board can also be powered through its TTL serial header by a USB-to-serial adapter, and an integrated power switching circuit makes it safe to have both supplies connected at the same time.

The A-Star 328PB Micro breaks out 19 general-purpose I/O lines along two rows of pins, including seven usable as PWM outputs and eight usable as analog inputs; another five GPIO pins (including two usable as PWM outputs) can be accessed along the bottom edge of the board. It provides both an in-system programming (ISP) header and a connector for TTL serial programming along the top edge. The board fits all this into a 1.3″ × 0.7″ area (the same size as the Arduino Pro Mini), and its 0.1″ pin spacing makes the A* easy to use with solderless breadboards, perfboards, and 0.1″-pitch connectors.

Each of the four versions uses a different power LED color as a way to differentiate them.

The comprehensive user’s guide provides the basics you need to get started with the A-Star 328PB Micro as well as detailed technical information for advanced users.

Either a USB-to-serial adapter or an AVR in-system programmer (ISP) is required to program the A-Star 328PB Micro from a computer. We recommend our USB AVR Programmer v2.1, which can be used as both.

Speed warning for 20 MHz version: The 20 MHz resonator frequency exceeds the maximum explicitly allowed in the ATmega328PB datasheet. In our basic testing, the 20 MHz resonator appears to function without problems, but for any critical applications you should confirm for yourself that this product is appropriate.

This version has a 5 V regulator that can be powered from 5.5 V to 15 V, and it features a 20 MHz resonator, which matches the voltage and clock speed of the Arduino Uno. It can be distinguished from other versions by its red power LED:

The A-Star 328PB ships with a preloaded Arduino-compatible TTL serial bootloader (which uses 0.5 KB of flash memory, leaving 31.5 KB available for the user program). We provide a software add-on that enables the board to be easily programmed from the Arduino environment.

Since the A-Star’s ATmega328PB microcontroller is backward-compatible with the ATmega328P commonly used on Arduino boards (like the Arduino Uno and Pro Mini), existing programs and libraries written for a standard Arduino can be used on the A-Star 328PB without any changes (except to account for clock speed differences when necessary). However, our add-on includes support for the new features on the ATmega328PB, making them easier to use from the Arduino environment and allowing the A-Star 328PB to be an upgrade from ATmega328P-based boards.

The A-Star 328PB is the same size as the Arduino Pro Mini. It can similarly be used as a compact, minimal alternative to a standard full-size Arduino, but since its pinout differs, this board is not a drop-in replacement for the Pro Mini.

Differences between the ATmega328P and ATmega328PB

The Pololu Arduino software add-on makes it easy to use the additional GPIO functionality, PWM outputs, and TTL serial port. The other new features of the ATmega328PB can still be used from the Arduino environment through direct register access or custom libraries. 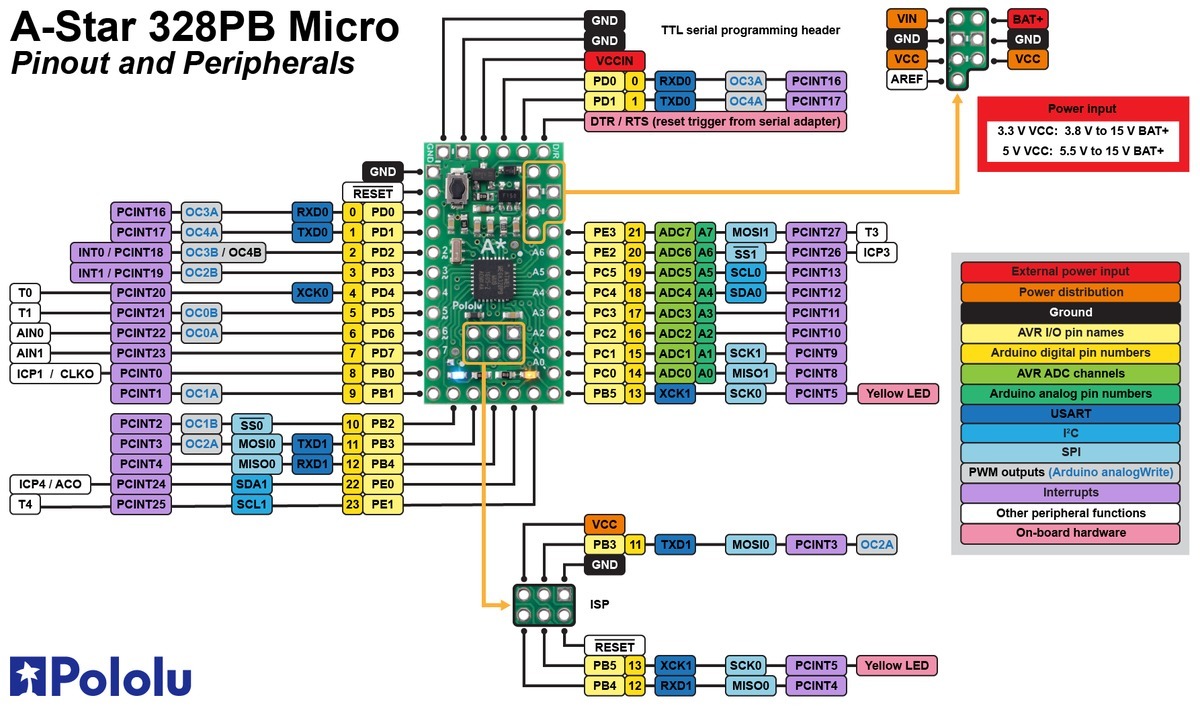 This diagram identifies the I/O and power pins on the A-Star 328PB Micro; it is also available as a printable PDF (579k pdf). For more information about the ATmega328PB microcontroller on this board, see Microchip’s ATmega328PB documentation.

Printed on the A* circuit board are indicators that you can use to quickly identify each pin’s capabilities: pins labeled with A0 through A7 can be used as an analog input, and a square wave symbol under the pin number means it can be used as a PWM output. All of the pins are labeled on the bottom silkscreen, and some of the pins are also labeled on the top silkscreen (as space allows). 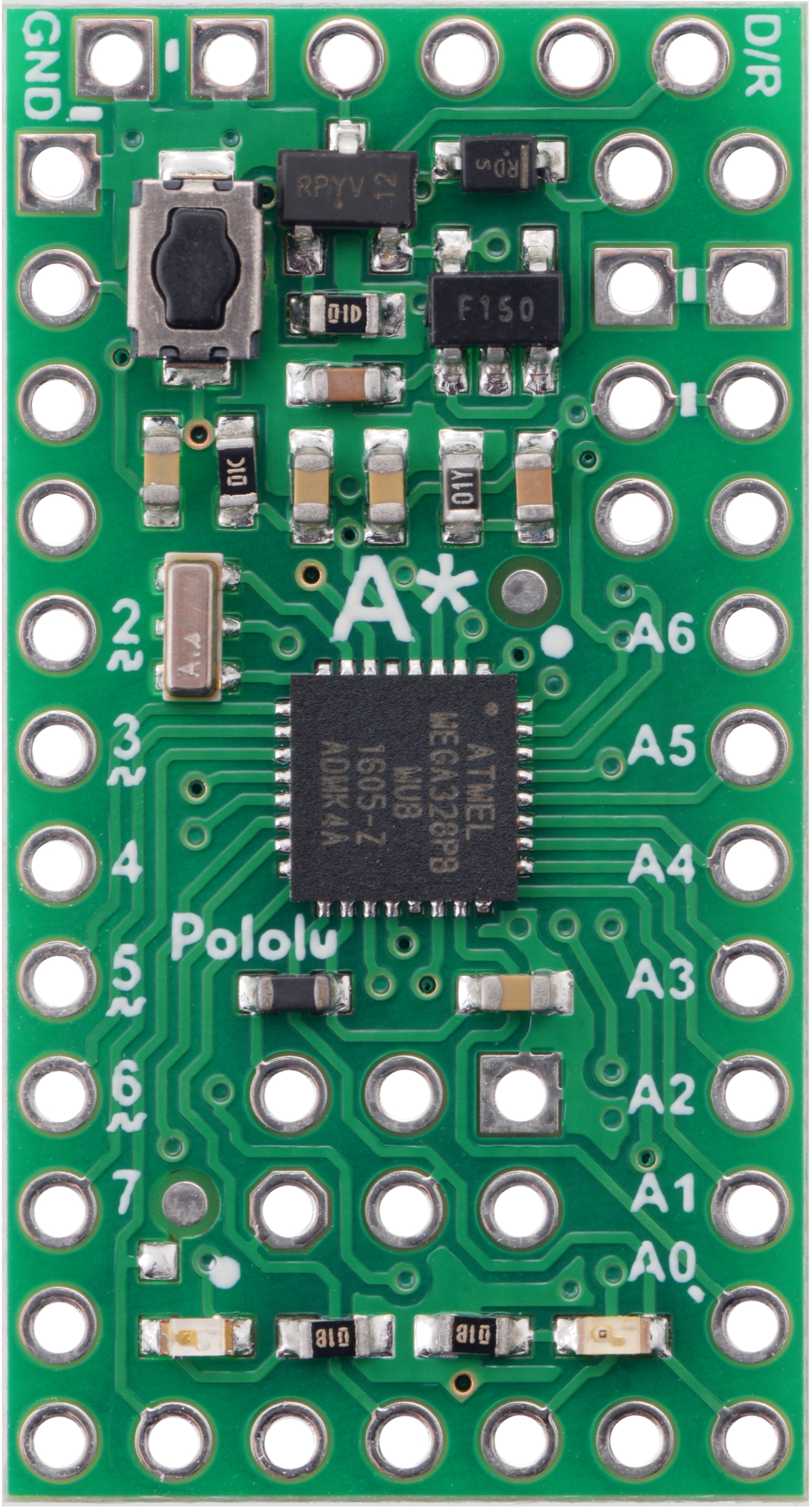 The board can be powered either through a USB-to-serial adapter connected to its serial header or from a source up to 15 V on the BAT+ pin, which is reverse-voltage protected and reduced to 3.3 V or 5 V by a 100 mA low-dropout (LDO) regulator. The A-Star 328PB Micro includes a switching circuit that makes it safe to have both VCCIN and BAT+ power supplies connected at the same time. Reverse-protected power can be supplied to other devices by using the VIN pin as an output, and the logic voltage supply is available on the VCC output. Alternatively, the external supply can be connected directly between VIN and GND, bypassing the reverse-voltage protection. 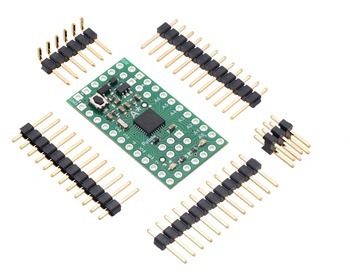 A set of three 1×12-pin breakaway 0.1″ male headers is included with the A-Star 328PB Micro, which can be soldered in to use the board with perfboards, breadboards, or 0.1″ female connectors. Also included is a 1×6 right-angle 0.1″ male header that can be installed to allow TTL serial programming with a USB-to-serial adapter, along with a 2×3 header to allow external programming of the microcontroller through the AVR ISP interface. Our USB AVR Programmer v2.1 can program the A* through either of these interfaces.

The A-Star 328PB Micro is a part of our larger A-Star family, all of whose members are based on AVR microcontrollers and are preloaded with Arduino-compatible bootloaders. The table below shows some key features and specifications of our A-Star microcontroller boards to help you choose the right one for your application.