Ordered some makerbeam products. Arrived quickly, perfect condition, well worth money. Thanks for...
Parts for small computer build 02/02/2021
Excellent company to deal with Prompt and Efficient, also when I rethought a problem they...
John Shrewsbury 08/01/2021
Super fast shipping top quality items and service will purchase again.
JOHN Berrington 18/12/2020
Excellent. Looked all over locally and on the internet and then found TECHNOBOTS. Everything I...
Rick Oades 06/11/2020
Very good service and quick delivery. Reccommended.
Alan 28/10/2020
This is my first order with Technobots. I ordered on Wednesday and the package arrived on...
J 24/10/2020
Brilliant service, drive belt arrived after 1 day
Thankyou
John tansey 14/10/2020
Great service from you in the past and hopefully in the future. Last order arrived next day magic!
Ron Hazeldine 14/10/2020
Excellent A1 service, thankyou.
Peter 14/10/2020
Technobots have a good range of stock, in usefull pack sizes and good prices. The website is easy...
Adrian 26/08/2020
Excellent, quick and reliable service. All the items I ordered got to me, even though some had to...
Richard Whitehurst 29/07/2020
Super speedy delivery on the normal postage charge, items came next day. Really impressed.
Glenn Martin 07/07/2020
Ordered late Sunday and delivered by standard mail Tuesday morning, exactly what I wanted and...
Idris Lewis 09/06/2020
Ordered parts in the morning and despite the Corona crisis and standard delivery specified, they...
Ian Mitchell 07/06/2020
Excellent! First purchase VERY fast service highly recommended ????
Denis Speirs 02/06/2020
Great products and service. Couldn't be happier. In my hands within 23hrs of ordering. Ideal...
Stuart Webb-Davies 19/05/2020
Good product and an excellent service. Extremely good price for a high quality product
Mel Plant 05/05/2020
I have used Technobots for a few years, I am principally using components for radio-controlled...
Tony Simons 27/04/2020
Found this site on Google, was really impressed by the price but still a little sceptical....
Kristian 25/04/2020
I work on interractive models for a National Trust property, several get broken every year...
John Shrewsbury 20/04/2020
Quickest delivery I have had, great selection of components and materials.
Ian 31/03/2020
Always first class products and prompt service, a target for other companies
Brian Knight 23/03/2020
First time order, found this company through an internet search for a less common component. I...
NL 18/03/2020
Fantastic quick service . will recommend...and use again
Will Turner 17/03/2020
First rate products, prices, service and packaging. I have placed three orders now and they have...
David Smith 11/03/2020
Great service I know where to come in future
Lesh 02/03/2020
Excellent to deal with well layed out and excellent information available with products. Order...
John Barkess 01/03/2020
Excellent service. Ordered on Sunday night and delivered Tuesday.
Terry Gough 26/02/2020
I placed my order on the Friday and I received my items the next day excellent service would...
L 25/01/2020
Excellent.
CDH 22/01/2020
Save 50% 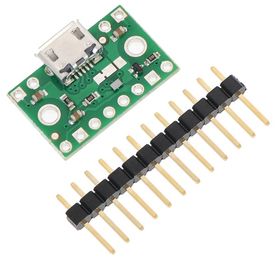 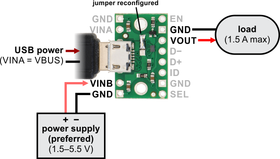 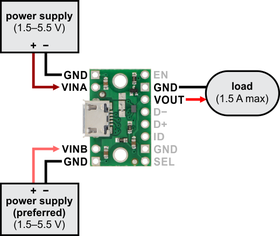 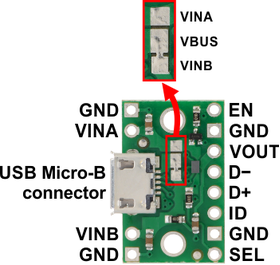 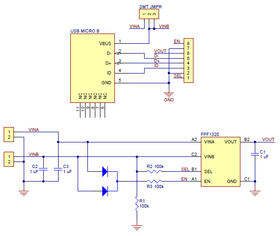 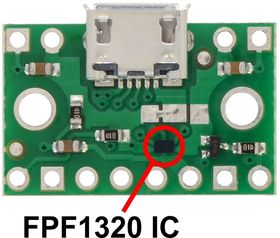 The Fairchild FPF1320 dual-input single-output power switch is a unique IC that switches a load between two power sources. It behaves as a power multiplexer (or mux), using a digital select signal to determine which of the two 1.5V to 5.5V input power rails to connect to the output, and can handle a maximum of 1.5A while blocking unwanted reverse current from flowing from output to input or between inputs. Each input channel is controlled by an internal MOSFET switch, avoiding the voltage drop that occurs when diodes are used to OR multiple power supplies together.

However, the FPF1320 is only available in a tiny 1mm × 1.5mm BGA (ball grid array) package, making it difficult for a student or hobbyist to use. To address that issue, this board mounts the chip onto a compact carrier with 0.1″ pin spacing that makes it easy to use with standard solderless breadboards, and it also serves as a breakout for a USB Micro-B connector that can be used to supply one of the input power rails.

The board is configured so that the “B” power rail is preferred and will be selected by default when that power source is present. USB power is connected to this preferred rail, so the default behavior is for the board to select USB power when USB is connected and the alternate “A” power rail when it is not. This enables the common application of having a device that can be powered by USB or an external power supply, automatically choosing the appropriate source based on what is connected. The default behavior can be changed through a surface-mount jumper and overridden through the power select (SEL) input.

Since this board is a carrier for the FPF1320, we recommend careful reading of the FPF1320 datasheet (1MB pdf) from the 'Downloads' tab.

The FPF1320 has two control inputs that can optionally be used to override the default behavior of the device: SEL (power select) and EN (enable).

The SEL pin determines the which power input rail is connected to the output: logic low (< 0.65V) on SEL connects VINA to VOUT, while logic high (> 1.15V) on SEL connects VINB to VOUT. The board pulls SEL to VINB by default, so a suitable voltage on VINB will cause it to be selected as the power source regardless of whether VINA is present, making it the preferred power source. When VINB is not present, the SEL pin is pulled low by default and VINA is automatically selected. Externally driving the SEL pin will override this default behavior.

Because of the way the board connects SEL by default, the output voltage will briefly drop to the logic level threshold of the SEL pin (about 1V) when the multiplexer is transitioning from the VINB source to the VINA source. The “Power source selection” section below discusses this behavior in more detail, as well as some possibilities for modifying it.

The EN pin can be driven low to turn off the output and put the FPF1320 in a low-power state. The board pulls EN high through a 100kΩ pull-up resistor and a pair of diodes to both VINA and VINB, so it is enabled by default when a suitable voltage is present on either input.

If you want to select from between two general power supplies, you can connect power source across VINA and GND and the other across VINB and GND. The voltages on these power inputs should be between 1.5V and 5.5V. The load should be connected across VOUT and GND and should draw no more than 1.5A. In this configuration, the “B” power supply is preferred and connected to the output by default when it is present.

The Micro-B USB connector makes it easy to use USB as one of the two power sources. By default, the VBUS line from the USB connector is tied to VINB. This allows you to power your circuit from either USB or an external power source connected to VINA, with USB as the preferred power source.

f you want the external source to be preferred instead of USB, you can use a hobby knife to cut the trace in the board’s surface-mount jumper that connects the VINB and VBUS pads, then bridge the VBUS and VINA pads to connect those two lines together. You can then connect your external source to VINB, making it the preferred supply.

Warning: It is important to be aware that while this board has three power inputs, two of those three are typically tied together (there are only two independent power inputs to the FPF1320). As such, you must take care to avoid creating a short circuit between USB power and an external power supply. For example, when the board is in its default configuration (i.e. with VBUS tied to VINB), any external power supply must be connected to VINA; connecting it to VINB will create a short between this power supply and USB power when USB is connected.

The remaining lines from the USB connector (D−, D+, ID, and GND) are broken out to a set of pins adjacent to VOUT, allowing this module to also function as a basic USB Micro-B connector breakout board.

The FPF1320 itself is capable of seamlessly transitioning between sources when the logic level of the SEL signal changes. However, since the board pulls SEL to VINB by default, the multiplexer will not select the VINA source when the VINB source is disconnected until VINB falls to the threshold at which the SEL state changes (somewhere between 0.65V and 1.15V). Since VOUT is supplied by VINB until then, it will also fall by the same amount, which can be a problem if the load normally operates at a higher voltage and cannot tolerate a drop to 1V. (For example, the load might be a 5 V microcontroller that undergoes a brown-out reset if its supply voltage falls below 2.7V.)

To avoid such a pronounced drop when switching from VINB to VINA, you can bias the voltage on SEL. The board connects SEL to VINB through a 100 kΩ resistor, so adding a resistor between SEL and GND creates a voltage divider that lowers the SEL voltage and in turn causes the board to switch sooner. For example, adding a 30kΩ resistor between SEL and GND lowers SEL to about 1.15V when VINB is 5V, and in our tests, it caused the FPF1320 to switch over to VINA as soon as VINB fell to about 4V.

Note that the SEL input does not have a precision threshold, so even this method might be unsuitable for especially voltage-sensitive applications. In such cases, the selection behavior can be overridden by directly connecting a digital signal (such as an output from a comparator or a microcontroller monitoring VINB) to the SEL pin.

The included 1×12 strip of 0.1″ header pins can be broken into smaller pieces and soldered in to use the board with perfboards, breadboards, or 0.1″ female connectors. The board has two mounting holes that work with #2 and M2 screws (not included).